You know that thing children do when they don’t want to listen to what you’re saying – putting their fingers in their ears and singing ‘la, la, la, la, la’? … well that’s pretty much the approach I’m taking to the imminent arrival of autumn. 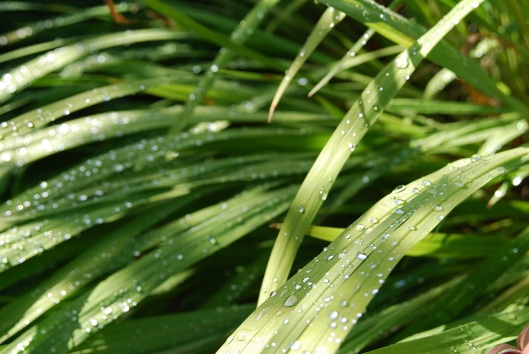 The summer has been so good, a little late in arriving maybe, but on the whole it was hot and sunny, just like a real summer should be.  I’m not ready to give it up for shorter, colder days and frosty nights.  If it was just autumn, it wouldn’t be so bad – as a season it has some redeeming features.  But it’s the fact that winter will follow that makes autumn unwelcome, for me at least. 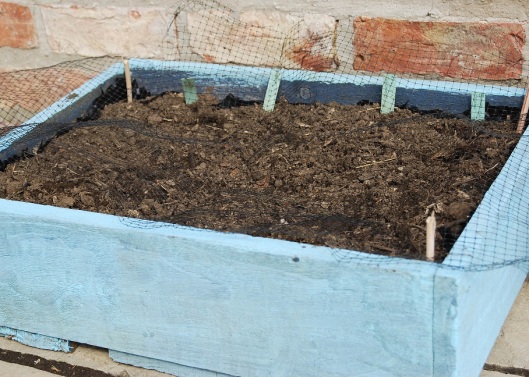 Still, whatever my feelings on the matter, autumn will arrive and there are a few gardening chores that need to be done to ensure there’s something to harvest through the colder months… and other crops that will overwinter and start growing when things warm up again next year.  Yesterday I sowed a wooden box on the patio with some winter leaves – chard, lettuce ‘Winter density’, kale and spinach ‘Polarbear’.  With it being close to the back door I should remember to water it, and can easily throw some fleece over the whole thing if (when) the weather turns especially cold.  The box looked quite nice too – painted blue and filled with fresh compost… well it looked nice for about an hour, at which point the cat wandered past, saw it as a conveniently positioned litter tray and used it.  Luckily (for the cat) the damage was easily fixed, and there’s now a net over the top of the box to prevent any further confusion.

Being super-organised, I’ve also bought some garlic ready for planting next month.  And I have a list ready to make an order for more garlic, some shallots and seeds for autumn sowing just as soon as I’m done writing this. 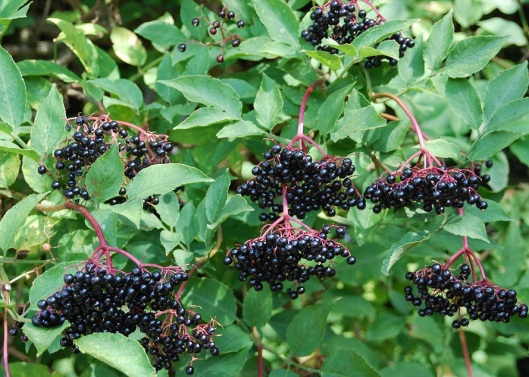 One thing I do like about late summer and autumn is all the ripening fruit.  We’ve already had a spiced apple cake, and an apple and blackberry crumble.  Then there’s the elderberry cordial that I made a couple of weeks ago.  We’re not big cordial drinkers here, so I’ve been looking for other ways to use it – that’s how elderberry ice cream came about.  I used plums cooked down in elderberry cordial to make a sort of compote, and stirred this into a mixture of cream and condensed milk before putting the whole lot in the freezer. The flavours of plums and elderberries work really well together, and the texture of the ice cream is good and creamy.  The basic ice cream recipe came from here – one of the top 10 Italian dishes in a Channel 4 programme.  I’ve adjusted the proportion of cream to condensed milk slightly, (mainly because I don’t like the taste of condensed milk), and changed the flavour to be seasonal and fruity. 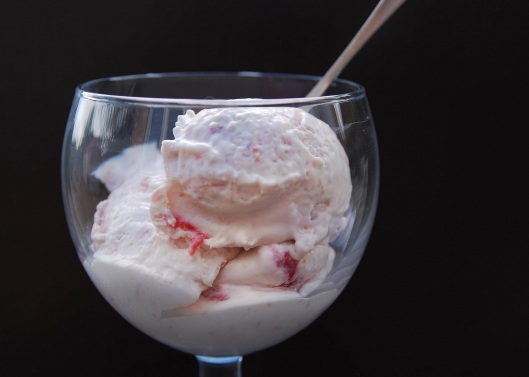 Plums are the one ingredient for September over at Franglais Kitchen and How to Cook Good Food, so I’m entering this recipe.

I think it also qualifies, just about, for September’s Four Seasons Food challenge hosted on alternate months by Anneli who writes at Delicieux and Louisa of Chez Foti.  This month it’s Anneli who is hosting and the theme is ‘Sliding into Autumn’.  While ice cream might not be the first food you associate with autumn, I’m relying on the autumnal berries and fruit to allow me to enter…

Put the chopped plums and elderberry cordial into a small saucepan and cook over a medium heat until the plums are so tender they are falling apart.  Take off the heat and leave to cool completely.  When cool, stir in the vanilla extract.

Use an electric whisk to beat the condensed milk and cream together until they form soft peaks… this takes a while.  Add the plum mixture and fold into the ice cream.  Spoon the ice cream into a plastic pot with a lid and freeze until it’s frozen but still soft enough to scoop out and enjoy. 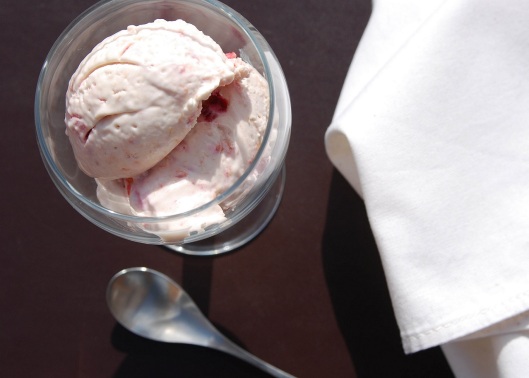