It’s started – seed sowing season has begun again.  The pots of chilli seeds sitting snug and warm in the propagator have been joined today by a first pot of tomato seeds.  The chillies are starting to germinate too, but they’re going to be a bit of a lucky dip this year.  Carefully sown and neatly labelled, the propagator was then kicked over during some over exuberant play (and there was me worrying that the cats might knock it over…).  After scooping up as much of the compost as I could and re-sowing all the seeds I could find, I crossed my fingers and waited to see if anything would germinate.  And quite a few seeds have sent shoots up to the light, despite their rough start in life.  I just have no idea which is which, and it probably won’t be until the plants are forming chillies that I can at least try to work out which variety they are.  Ah well, at least they’re growing.

Seed sowing season is always a good landmark to reach in the gardening year, less so is weed season.  We’re not yet into the full on, despair inducing weed season that starts round about May or June time.  You know, the days when the weeds are spreading, flowering and producing seeds as you watch.  This is early growth, just enough to let me know that the weeds are still there and planning a major assault on the garden for later this year.  There’s a dandelion flowering among the snowdrops, crocus and pulmonaria. 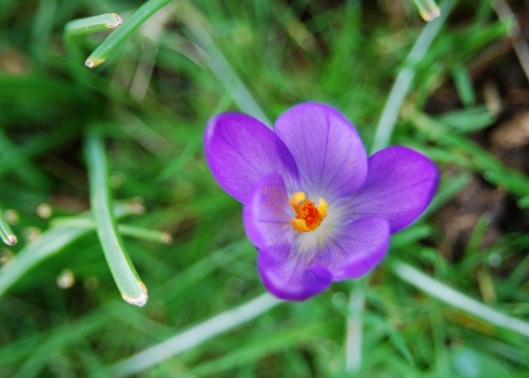 And the nettles are making fresh leaves.   I’ve written before about nettles and how they should be embraced (well, not literally) as a garden plant – good for wildlife and for brewing up a nutrient rich liquid feed.  They also make a good food for humans.  Last year I was using nettles with garlic and chilli to flavour cannellini beans.  This year it’s a mixture of chopped nettles, herbs and salt topping a crusty focaccia.

Usually I’d be using this recipe for focaccia.  But after watching Food & Drink the other night I decided a change is as good as a rest and all that, and I would try Gennaro Contaldo’s recipe.  Except that I halved the amount of flour, yeast and salt… but found that I needed a lot more than half the water.  The topping was a combination of spring-like fresh young nettle and parsley leaves, with the more wintery herbs – rosemary and thyme.  Throw in some olive oil, salt flakes and soft, milky mozzarella and you have a pretty much perfect celebration of the best flavours around towards the end of a very mild winter.

Now the only question remaining is whether I can justify adding this to February’s Cheese Please! challenge?  Let’s see… the theme this month is Cheesy Romance, and I’m guessing a slice of focaccia topped with nettles isn’t everyone’s idea of romance.  But mozzarella is from that most romantic of countries, thyme is associated with affection, rosemary has long been a symbol of love and loyalty, and nettles – well ok, I couldn’t find any link between nettles and love.  Still, do you think the romantic cheese will be enough?

Some nettles, plunged into boiling water for 2 minutes, refreshed, squeezed and chopped

Combine the flour, yeast and salt together in a large bowl.  Add the water and mix to form a soft, but not too wet, dough.  Tip the dough out onto the work surface and knead for 5-10 minutes, until you get a smooth, elastic ball.

Put the ball of dough back into the bowl, cover with a damp tea towel or some cling wrap and leave to prove for about 1 hour… it should be about double in size when it’s ready.

Mix all the topping ingredients in a small bowl.  Oil a baking sheet.  Roll or push the dough out into a circle about 9”/23cm in diameter… or a rectangle, square or even a heart shape if you feel like it.  Spread the herby topping over the dough and squidge it in slightly with your fingers.  Cover and leave to rest for 30 minutes.

Bake the focaccia in a preheated oven for 20-25 minutes.  Tap the bottom of the bread and listen for a good hollow sound to check that it’s cooked through.  Allow to cool on a wire rack until the bread is at least just warm rather than oven fresh hot.  Enjoy with pasta, soup, roasted vegetables, or just on its own.