Once upon a time, shoppers bought their bread from a local baker.  The loaves they bought were made using only four ingredients, and took time to prepare and bake.  Bakers learned their craft… they knew how to work the dough to get the best flavour and texture from a loaf, and were up through the night to ensure that fresh bread was available each morning.

Then modern bread making methods were developed, allowing more loaves to be made in a shorter space of time, and revolutionising both the process and the product.  Forget the long fermentation needed to produce bread with lots of flavour and a chewy texture… now loaves could be pulled from the oven just a couple of hours after mixing together the flour, yeast, salt and water.  Well flour, yeast, salt and water along with dough improvers, flour treatment agents, emulsifiers and preservatives.  Add enzymes to the mixture and you can speed the fermentation along, producing and holding the gases that give bread its rise in a much shorter time.  Emulsifiers help to keep the dough nice and uniform, and preservatives… well, they’re what you need for a good long shelf life.  Now much of the bread sold in British shops is soft, light, fluffy and uniform. 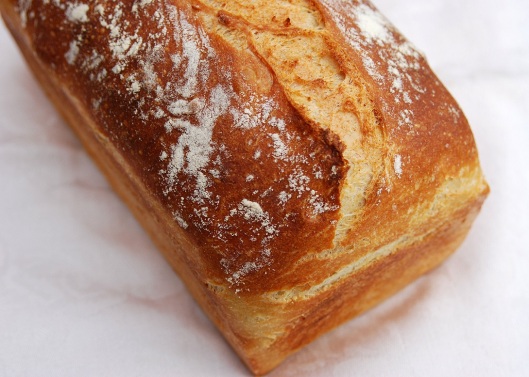 And then they wonder why in the UK, bread is the food most likely to be thrown away… a couple of years ago up to 32% of the bread bought was ending up in the bin.  Bread is no longer valued as a food that is baked with care and time.  It’s cheap, produced in vast quantities, and not really that tasty anymore.

Thank goodness there are some really good artisan bakers out there.  Specialising in baking real bread… bread that takes time, and quality ingredients to produce.  But what if you don’t have a real bread baker close to home, is baking your own a better option than supermarket loaves?  Bread making takes time and needs a bit of forward planning, but taking a crusty, fresh loaf from the oven makes it all worthwhile.  And really, it isn’t that much work.  The recipe that produced the loaf in these photos takes a good 24 hours from getting the mixing bowl out of the cupboard to slicing the finished loaf.  But much of that time is just letting the flour, yeast, salt and water do their thing, no input required.  In total, the mixing, kneading, folding, shaping, and baking takes not much more than 30 minutes of those 24 hours.  And for all of that half hour you can be listening to the radio, chatting with the kids, or even watching TV while you attend to the dough… why not catch up with The Archers while you’re kneading? 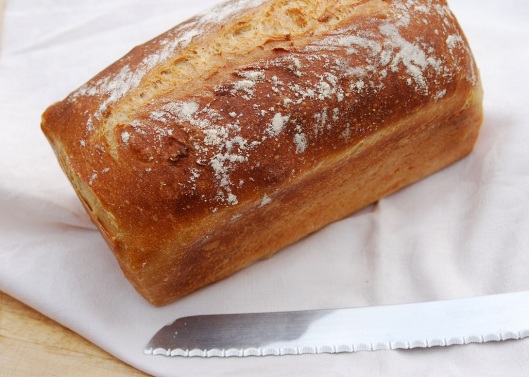 And, while I haven’t done any proper calculations, I reckon the ingredients for a home baked loaf of bread cost well under £1.  Even when the cost of heating the oven to bake it is added on, it must still work out cheaper than all but the rock bottom priced, sliced supermarket loaf.  Even if it does cost a little more, you’re much more likely to eat the whole thing… no one wants to waste bread that tastes so good.

Writing this has reminded me of a really nice post about a baker in Lewes, Sussex that I read over on Andrea’s blog at Shabby Chick.  This is the link if you want a quick read of the story – http://www.shabbychick.me.uk/2013/10/10/medieval-hearth-bread/