I don’t know if you remember January’s Garden Share Collective post from The Garden Deli.  It was basically a long whinge about how wet the garden was, and how many rabbits there were digging holes and eating anything green.  There’s not much change between then and now.  It’s still wet, very wet and there are more rabbit-related holes than ever.  But I’m not going to complain about the wet and the mud – there are a lot of people coping with much wetter conditions, and we’re lucky to have no worse than very soggy ground and puddles.

Instead, let’s focus on the positives… 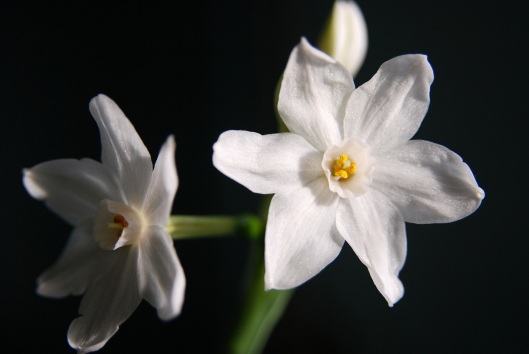 Narcissus ‘Paperwhite’ potted up last autumn and now blooming in the kitchen.  Beautiful flowers, and just what we need on a grey winter day.  But they do smell terrible close up… ok, not a complete positive.

Also in the house now is my trusty old propagator, and this is most definitely a step forward in the gardening year.  Retrieved from a shelf at the back of the garage, it’s now full of little pots sown with chilli seeds.  Yes, the seed sowing season has begun again… only a few pots so far, but it’s good to have the first batch in the warm, damp compost.  I’ve sown ‘Hungarian Hot Wax’, ‘Hungarian Black’, and ‘Prairie Fire’, along with a sweet pepper called ‘Tequila Sunrise’ and a pot of aubergine ‘Pot Black’.  I love seeing the first signs of germination each year – it means the growing cycle is beginning again and, even better, there should be vegetables to harvest and eat later in the year.

Over the next few weeks I’ll be sowing some lettuce, rocket and spinach into containers in the greenhouse, and more sweet peas for flowers in the summer.

A few years ago I bought a small pot of rhubarb from a roadside stand.  The small pot has turned into a big plant in the ground, and the pink stems it produces in late spring are delicious.  But the plant does have a bad habit of putting too much energy into flowering when, in my opinion, it should be making more stems.  I read last year that some plants are just more prone to flowering than others.  To test this out I’ve bought another small plant, this time from the lovely people at Victoriana Nursery.  It’ll be another year before I can harvest any stems from the newcomer, but I’ll be looking after this one carefully and hoping there are no unwanted flowers.

There are still vegetables and herbs to pick from the garden and use in the kitchen… once the mud has been washed from them.  Lots of parsley, the mild winter has suited it and I’ve been able to use leaves almost as if it was summer.  There are chicory, kale and leeks too.  Some of the leeks are going to be harvested and used for my son’s food technology project next week.  He’s designing and testing a product suitable for selling in a farm shop – I’m looking forward to helping out on the testing side of things…  And I’ll be needing some kale and parsley, along with any chard leaves I can get to before the rabbits do, for some pastry parcels with a spiced chickpea filling – our vegan dish of the week.

So that’s the garden at the start of February and my Garden Share Collective post for this month.  Click over to Lizzie’s blog for a whole world of gardens being shared.  It’s a good chance to forget the winter storms for a short while and enjoy a bit of southern hemisphere sunshine in someone else’s garden.  Or to compare your February to do list with other gardeners on the northern side of the equator.