Now here’s a grand way to cure the January blues… especially effective if you’re a gardener.  A parcel stuffed full with packets of seeds. 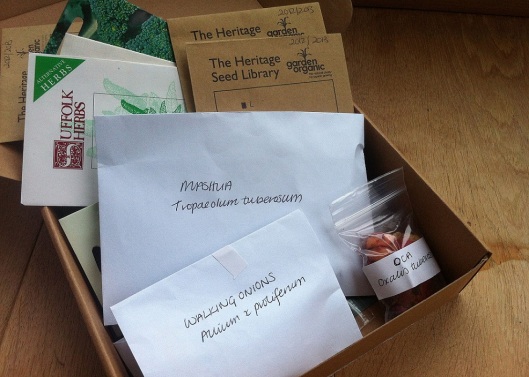 This is the second year I’ve joined in with the big seed swap that is Seedy Penpals.  It’s a scheme run by Carl Legge from his smallholding in beautiful North Wales.  He does a great job organising the swap and making sure that the penpals get in touch with each other, talk gardens and plants and, of course, send out their seedy parcels on time.  The seeds swapped can be old favourites you’d like to share, seeds that you’ve saved from your own plants, or new discoveries that you think your seedy penpal would just love to grow.  Anyone can join in (well anyone living and gardening in the EU).  And you don’t need a garden that runs to rolling acres – the idea is that your seedy penpal contacts you before putting together their parcel, so that they send seeds that are suitable to your growing space and conditions.  If you think you might be interested in joining the next seedy swap later this year, have a look here for more information.

Better than just an exchange of seeds though, through seedy penpals you get to ‘meet’ with other gardeners, swap ideas, advice and, all being well, successes as your seeds grow to flower or produce crops in the months that follow.

The latest Seedy Penpal swap was this month, and I must admit that when the spreadsheet listing seedy partners was emailed through, I was excited to see that it was Emma Cooper who would be sending a parcel of seeds to me.  I’ve known Emma for a while now… that is in the online, blog and Twitter sense of knowing someone, and I suspected that the parcel would contain some interesting and unusual seeds.  And indeed it did, not just seeds either… this year I’m going to be growing mashua, achocha and oca, along with a heritage variety of marrow called ‘Long white trailing’ and rocoto chillies. 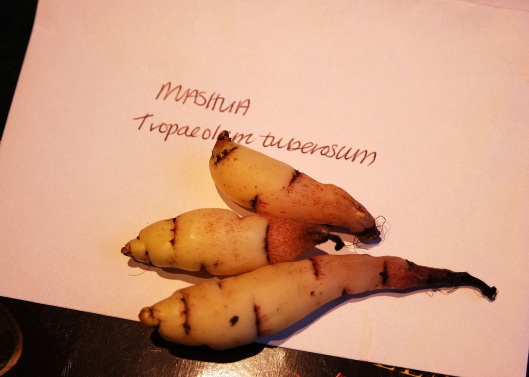 Between some books and the internet. I’ve been able to read up on the vegetables I’d not heard of before – the mashua and achocha.  Oca I’d read about before and is something I was thinking about growing, in fact I’d nearly added it to an earlier seed order.  I even have a couple of recipes earmarked for when I gather in the bumper harvest in the autumn… well, we’ll see how well it grows.

I’ll be sharing the successes and/or failures of the plants I grow from these seeds on the blog through the summer.  And if anyone out there has any growing tips to share, or indeed any recipe ideas for later in the year… please let me know.

27 thoughts on “A seedy parcel”