I was at the York Food Festival the other day.  Not to shop at the array of market stalls filling Parliament Street (I’m saving that for another visit), but to listen to a talk given by Julian Davies of the Stockbridge Technology Centre.  The theme for this year’s festival is ‘Food and Science’, and the talk was an insight into some of the new and sustainable methods being developed to produce our food.  The talk ranged from using rockwool plugs for raising tomato and cucumber seedlings, to satellite technology for controlling the path of tractors as they drive through the growing crops.

During the talk the issue of the strict supermarket quality standards for fresh produce came up.  This was then picked up by a lady in the audience during the questions at the end – why is so much produce rejected by these shops just because it doesn’t look right?  There was much muttering among other audience members, and the general consensus was that fruit and veg doesn’t have to be picture perfect – in fact, it would be far better if taste was the primary concern when selecting what to put on the shelves of the grocery aisles.  Someone pointed out that supermarkets are responding to what consumers want, we buy the evenly sized, unblemished apples and peppers so they assume that’s all we’re willing to accept.  But is this really the case?  Are we buying perfect fruit and veg because anything else just isn’t good enough?  Or is it really because supermarkets are convenient places to shop, and that’s all they have on offer?

A recent report for the UK’s Global Food Security programme states that the high standards demanded by retailers can result in up to 40% of some crops being rejected.  Growers are sometimes able to sell their ‘substandard’ crop on as animal feed, or to processors who wash and chop the veg to be sold as bagged, prepared vegetables.  But a lot is still wasted – left to rot or ploughed back into the ground. 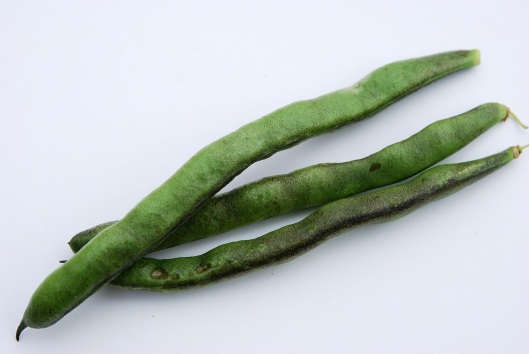 According to the report, the supermarkets are simply responding to consumer demands for top quality produce.  But are we really such a picky bunch when it comes to the fruit and vegetables we’ll put in our shopping trolleys?  Anyone who has had a go at growing their own food will know that not every tomato is a perfect shape, cucumbers sometimes grow with curves in them, and carrots… well carrots can be a law unto themselves.  But this doesn’t stop us from eating and enjoying our homegrown produce.  Flavour and freshness are what it’s all about.

Last year, when there were news reports of impending shortages because of the rubbish summer weather, some of the supermarkets began selling ‘ugly’ vegetables and fruit.  I don’t remember any outcry over the slipping standards in the greengrocery offerings, or maybe I just missed the tut-tutting from disgruntled shoppers as the pushed their trolleys passed boxes of less than perfect potatoes.  And surely the popularity of farmer’s markets and farm shops, where provenance and freshness count for more than looks is a sign that, at least some, shoppers can see past a bit of dirt or misshapen pear.

What do you think?  As consumers are we really driving the supermarkets to reject huge amounts of perfectly edible fruit and veg on the grounds of looks?  And if you’re reading this from outside of the UK, I’d be interested to know if these strict standards are applied by supermarkets in your part of the world, or is this a very British situation?

Oh… and if you’re in the York area, the food festival is on until the 29th September, and definitely worth a visit.

26 thoughts on “When looks really do matter… or do they?”