Everything’s a bit soggy after two days of rain and high winds.  But we were lucky and didn’t see the worst of the weather, there are a lot of people having to deal with much worse than a waterlogged garden. 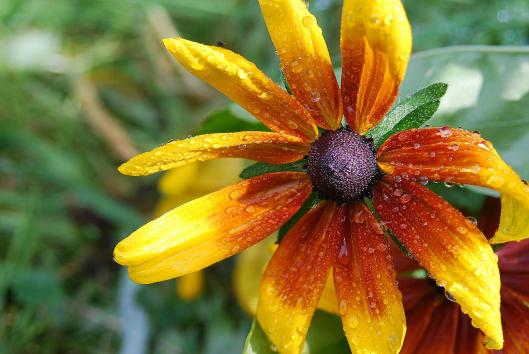 It’s been reported as the most intense September storm for 30 years.  Roads, rail lines and homes have been flooded – many in areas that were hit by similar floods in recent years.

Reports of extreme weather events, not just in the UK but globally, seem to be becoming more common.  There was a discussion on the radio this morning over the increasing number of ‘1 in 100 year’ weather events we’ve seen over the last couple of decades.

Climate scientists are saying that, while they can’t link individual extreme weather events directly to climate change, the probability of such events occurring is going to be higher under a changing climate.  So, are the droughts, high temperatures and severe storms across the world a taste of things to come as global temperatures rise?

The thing is that, here at least, gardening magazines are still advising us to plan for climate change by choosing drought-tolerant plants.  This might make sense in the long term, but given the weather we’ve had over the last few summers, I’d rather be growing lots of  nectar-rich plants (drought tolerant or otherwise) to help feed the bees and butterflies that are struggling with habitat loss and poor conditions.  But maybe that’s just me…

13 thoughts on “After the Rain”